We all want a low maintenance bird! 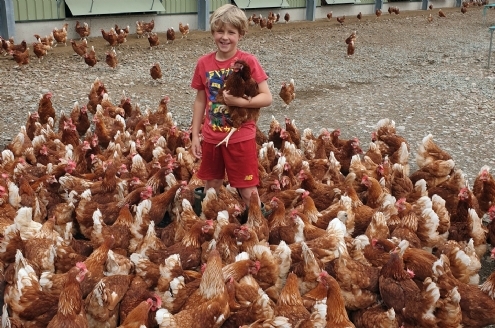 As Ranger readers will know only too well, there's a huge amount of effort goes into successfully producing free range eggs. And they'll also know that the trials and tribulations can vary from flock to flock and from breed to breed. In the words of Shropshire producer Alex Woollam, "we all want a low maintenance bird" and Alex believes he has found it in the Hy-Line Brown.

Alex entered the sector in 2005 with 16,000 birds on a flat-deck system, recognising the potential free range egg production offered in the way of a viable diversification for the family farm. Since that time, the flock has grown to 94,000 birds all housed in multi-tier systems. In that time Alex has tried several breeds and continues to do so but Hy-Line is his number one choice and the current flock consists of 30,000 standard Hy-Line Brown and 32,000 Hy-Line Brown Plus.

"With some breeds the slightest stress, not enough fibre in the ration, lights too bright, temperature swings etc and they will start to pull feathers and it's very hard to stop," says Alex. "We have used lorry loads of lucerne on other flocks but we've found the Hy-Line doesn't need any of this and they seem quite happy with whatever life throws at them. Once you lose feathers its terrible for the bird and the financials - feed consumption goes up as does mortality and egg quality deteriorates dramatically. Basically, a high maintenance bird will leave you penniless - this doesn't happen with Hy-Line."

Alex believes that it's the breed's ability to cope with challenges that results in exceptional liveability. "Hy-Line appears to be genetically more resistant to IB viruses and anyone who has had them knows that sub-two percent whole flock mortality is very achievable. This has a big impact on financials as it means you have a full house paying for their seats!"

Like most producers, Alex has had to respond to the increased demand from packers for Large eggs which is why he tried the Hy-Line Brown Plus for the first time. "So far the Plus flock is running at around 0.5 to 1.0 gram heavier than the Standard Brown but both have acquitted themselves well when it comes to egg weight," says Alex. "Average egg weight hit 63 grams by Week 27 for both flocks."

Alex's eggs are marketed by Griffiths Family Farms and feed is supplied by 2 Agriculture from their mill in Wrexham. "We took advice from Hy-Line's nutritionist Marcus Kenny and increased the Linoleic levels in the early ration and it has paid off hands down," says Alex. "Feed consumption has been very good with intakes of 123 grams even when egg weights have been averaging in excess of 64 grams. They're the only breed I have seen that eat to their production and food consumption actually decreases as the bird gets older and egg output reduces."

Griffiths Family Farms also reared Alex's birds at a nearby rearing site where they have recently invested in the conversion of former broiler houses to a multi-tier system with a capacity of 500,000 pullets a year. Alex believes that the rearing system prepared the birds well for the laying house. "I'm sure this has played a major part in our success with non-nest eggs which have been a dream. By Week 30 we were collecting no more than 50 floor eggs a day from a 32,000 bird house. Even at the height of nest training," reports Alex, "non-nest eggs topped out at around two per cent for a couple of weeks-only before quickly diminishing. Griffiths did a fantastic job and without doubt they are amongst the best pullets we have ever received. They rear for their own egg production sites so they know all about producing a good pullet."

With the quest for increased egg size, the birds were reared on a slow stepdown in rear to delay the onset of sexual maturity, reaching a 10-hour day by 10 weeks of age, some three to four weeks later than common practice. But once on the laying site, following advice from Hy-Line, the birds were lit up early. "We gave them an hour at housing and a further hour at Week 17. This had the effect of stimulating appetite and subsequent bodyweight gain. We continued with further light increases from Week 19 when they were weighing around 1600 grams," explains Alex. "It was a departure from what we have done in the past where we have generally held them back until 1500 grams bodyweight before any light stimulation but it appears to have been successful and I would do it again."

Alex also pays tribute to the support he has had from Hy-Line UK's technical team. "John Widdowson was a big factor in the success of this flock, his experience and guidance were very much appreciated, as was that of Neil Willett."