Wayne's eggs have the Plus Factor! 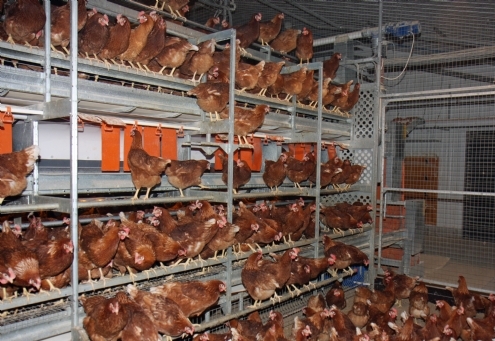 Wayne's eggs have the Plus-factor!

Introduced last year by Hy-Line UK in response to the market demand for larger eggs, the company's Brown Plus strain of layer appears to be living up to its reputation. Hy-Line claims the breed is capable of achieving an egg weight of up to two grams heavier than its best-selling Hy-Line Brown strain, whilst maintaining the Hy-Line Brown's well-established traits of persistency, feed efficiency, liveabilty and feather cover.

According to Hy-Line UK's managing director, Omead Serati, whilst the Brown Plus may be new to the UK market, it is not a new bird. "The strain has been running alongside the Hy-Line Brown for many years and it is the result of using an enhanced line which has been selected for higher egg weight," Mr Serati told the Ranger. "The Plus is sold in 44 countries across the world. The original Hy-Line Brown line was segregated for standard and larger egg size ten years ago. Aside from egg weight all other characteristics and goals of the selections are identical between these two lines."

Early results are indeed showing an increased egg weight, as JA & J Tunstall, who farm near Northallerton, Yorkshire, are discovering. At week 30, their 24,000 bird flock is laying at over 95 per cent with average egg weight 65.7 grams. Neil Willett, area Sales and Technical manager for Hy-line, is a regular visitor to the farm to see owner Wayne Hardy and his manager Mark Chapman and to date has been impressed with the flock's performance. "The birds reared very well and were 1382 grams pre-transfer," said Neil. "We housed them on 10 hours light and then didn't stimulate them until Week 19 by which time they were weighing 1612 grams. At that point we gave them an extra hour and then an hour each week until they were on 15 hours by Week 23 ." The birds, which were reared by Wot-a-Pullet, were weighing 1809 grams at that point and by Week 30 had reached 1911 grams bodyweight.

Reaching target bodyweight is crucial when it comes to achieving good egg weight believes Neil, a sentiment shared by Roger Lythe of Thompsons of York, who feed the flock. "At transfer the flock had a week on a high-energy Transitional Grower ration before moving to a Pre-lay diet for the following week," explains Roger. "For both these diets we used a 50:50 mix of meal and a short-cut pellet. We have found through experience with this mixture we achieve very good initial liveweight gain. Our objective was to reach a minimum bodyweight of 1500 grams as early as possible so we could increase the day length and bring the flock into production."

Roger explained that the idea of the grower ration followed by the pre-lay was to minimise the calcium intake, thereby making the diet more palatable. "The grower contains 1 per cent calcium and the pre-lay 2 per cent so that the bird is not receiving excess calcium during the first two weeks after housing. We have adopted this programme for all new birds housed and we also ensure the grist of our Transitional Grower is coarse to improve palatability and initial feed intake"

Holding back light stimulation whilst target bodyweight was achieved brought the flock into lay slightly later, losing one week of production against the target line. "But that was only a week of Smalls we lost," says Roger.

From Week 18 the birds were fed Thompsons' Early Lay Plus diet and at Week 22 this ration was supplemented with extra Methionine for two weeks to further boost egg size. Lower density diets were introduced once the average egg weight had reached 65 grams, with the aim being to flatten off the egg weight curve. Roger explained that the flock gets six feed per day, with a 'block feed' on the fourth feed. "A block feed is run half an hour after the initial feed and for the full run, this allows the birds at the bottom of the peck order to receive the complete diet. The objective is to increase the evenness of the flock."

Oyster shell at the rate of a gram per bird is now being added onto the loads of feed, as well as it being spread on the litter, which Mark Chapman report the birds are readily ingesting. And litter quality is very good at Hall Farm thanks to an innovative idea. The scratch areas positioned next to the popholes of the Big Dutchman multi-tier system, benefit from underfloor heating supplied by a bio-mass boiler.

"The aim was to improve litter quality where the birds were coming in and out of the shed from the range area," says Mark. "It's worked extremely well. In fact a little too well perhaps as we have to go in around every eight weeks and remove some of the excess litter as the depth builds up. This is done at night when the birds are up on the system and doesn't appear to bother them."

Whilst making the scratch area so warm and comfortable may give producers visions of floor eggs and birds camping down there at night, according to Mark this hasn't been a problem, and floor eggs were down to a very manageable three per cent by Week 27. "With this flock all the birds were going up onto the system to roost within a week. However, every flock is different and I think in future we'll leave the heating off for the first few weeks during the training period."

This is only Wayne's second flock as a free range egg producer and the eggs are contracted to Yorkshire Farmhouse Eggs, who Wayne says have been a tremendous help every step of the way, right from the initial planning stages. And Wayne has been grateful for all the help he has received. "Every day is a school day but there has been so much help out there, from the breed company through to the pullet rearer, the feed compounder and the packer, we couldn't have done it without them."

His first flock were Hy-Line Browns which laid an impressive 369 eggs per hen housed to 78 weeks, with a total egg mass of 22.53kg. Eating an average of 119.18 grams resulted in a Feed Conversion Ratio of 2.259. This time round, Wayne has opted for the Brown Plus in an effort to get more Large eggs. "So far, I'm very pleased with the flock and while we may get a few eggs less with this flock, overall profitability is likely to be better because of the improved egg size."

Commenting on his decision to enter the free ranger sector, Wayne, who also runs a pig fattening operation along with an agricultural contracting business, said it was something he could do on a limited acreage. "Effectively it has helped make a 40-acre farm viable for the next generation." And Wayne was full of praise for manager Mark. "Mark deserves a lot of credit for flock performance and the enterprise would not have been the success it has without him. He's a very committed and gifted stockperson and demonstrates tremendous attention to detail which shows itself in the results we've achieved so far."