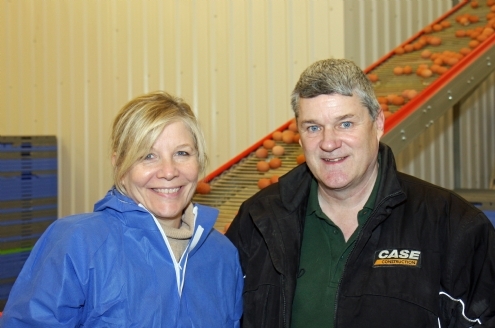 It is a key component of profitability for egg producers and Hy-Line varieties are renowned for maintaining superior feather coverage throughout their life leading to a healthier appearance during production, better feed conversion and higher profits at the end of lay.

Feather loss can occur naturally as part of a hen's aging, but there are many factors that can promote it. Direct reasons for feather loss include feather pulling, external parasite infestations such as mite, mechanical abrasion and moulting. It can be significantly increased by mechanical, nutritional, and environmental conditions, and by poor bird health, stress and antagonistic social interactions. Housing type and bird density are also important considerations. Lighting programmes, including light type, sources, photoperiod, and light intensity also must be managed properly to reduce feather loss.

With the growth in free range and barn production systems, achieving good feathering is more important than ever with well feathered birds being an indicator of high welfare systems, something auditors are placing increasing emphasis on. But it's not just about looks, birds lacking good feather coverage spend more energy trying to maintain body temperature which leads to increased feed consumption and poorer feed conversion. Studies have shown that poorly feathered birds can consume in excess of 15 per cent more feed. With feed being the highest-cost input for layers, producers need birds that will put energy into egg production, not thermal regulation. A further economic benefit is more first quality eggs, with poorly feathered hens being linked to the laying of pale-shelled eggs, particularly if ranging in bright sunshine.

BFREPA Chairman James Baxter and wife Margaret recognise the superior feathering quality of Hy-Line, which is one of the reasons it is the majority breed on their 128,000 bird free range unit located in south west Scotland. Margaret is responsible for making sure that the farm achieves top scores in all its audits and feather cover is high on her list of 'must have' traits. "Not only is good feathering important for overall flock health but it now plays a major part in assessing bird welfare during the numerous audits we have," says Margaret, who recalls one particular audit on behalf of a major retailer, when after five minutes the auditor said they had ceased scoring the flock for feather cover because the birds were all gaining top scores!

According to James, the Hy-Line's ability to keeps its feathers means that house lighting can be kept at a high level throughout the life of the flock, which helps maintain production levels and the management of non-nest eggs. "We start all our flocks off at 100 per cent light intensity and we don't have to reduce this with the Hy-Lines," says James, who entered the free range sector ten years ago. The first flocks on the farm were Hy-Line and they have stayed loyal to the breed ever since. "For comparative reasons we do run competitor breeds on the site," says James, "but if we could only have one breed it would definitely be Hy-Line Brown. As well as its excellent feathering, the bird is incredibly resilient, we've had mortality rates under two per cent at 76 weeks... and dead birds don't lay eggs!"

Lincolnshire producer Ivory Arden started free range egg production five years with 32,000 birds and the operation, spread over three sites, has now trebled in size. But Ivory didn't get her first taste of Hy-Line until last year and she has been so impressed with the birds, not least because of their feather cover and liveability, that two of the three sites are now stocked with Hy-Line and, says Ivory, she's edging ever closer to moving completely over to the breed.

"The feather cover has been excellent which is so important, particularly for free range when the birds are on show for all to see," says Ivory. In fact, it isn't just passers-by who get to see Ivory's great-looking birds for they are pictured in this year's BFREPA calendar, where they are in good company with nine of the twelve months featuring Hy-Line flocks.

"We've also found the Hy-Line very robust and it seems to bounce back from any challenges it has to face and this is reflected in the low mortality," says Ivory. The farm's first flock achieved a mortality rate of just 2.5 per cent at depletion aged 78 weeks and Ivory is looking forward to more of the same.