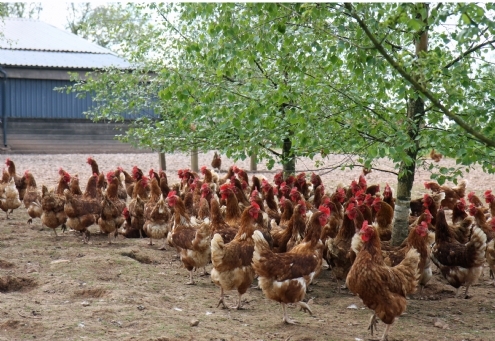 With producers keen to maximise profitability and genetic advancements leading to improved persistency of lay, the trend now is to take flocks beyond the previously accepted 72 weeks of age and for many 76 weeks is now the target... and flocks can go on well beyond this, as John Widdowson is discovering.

As reported previously in the Ranger, after nearly 30 years, John, who has kept a total of 20,000 hens housed in flocks of 4,000, has taken the decision to retire from free range egg production. "We've been depleting flocks since last October and with no new pullets coming behind to replace them it's meant that we've been able to keep the flocks until they are no longer viable," says John, who reports that so far all the flocks have made 76 weeks and beyond.

In fact the most recent flock to leave the farm, which were Hy-Line Brown – John's had nothing else for over 10 years, made it to 84 weeks. "The decision to deplete has been based simply on egg numbers and egg quality and in this case both held up very well," reports John. "On a hen-day average they were still laying at over 80 per cent at 75 weeks, ificant improvement in end-of-lay shell quality."

When it comes to egg size, John admits that this flock was at the top end of where he likes to see it. "If you're looking to extend the production cycle you can't let egg weight run away because if there's a major deterioration in egg quality that's likely to determine the depletion date. We've always pushed for early egg weight and then changed to lower-spec rations to hold it back."

John told the Ranger that this flock was on an early-lay ration until week 29 when the egg weight was averaging 64.75 grams back in April last year. "At that point we moved to our second stage diet and a month later we September the diet specification was once again reduced to the point that by week 69 the flock was on a fourth stage, late-lay ration.

There is no hiding John's enthusiasm for the Hy-Line breed – which is no doubt why he is now working for Hy-Line UK as Technical Consultant. "This flock left the farm at 84 weeks virtually fully-feathered, as have all our flocks of Hy-Line Browns." Good feathering is a vital trait, believes John, and it is a major reason why he has never considered using another breed. "On top of this, the bird is very resilient and always seems to bounce back if faced with a set-back. We have always operated a multi-aged site which means life has been pretty tough here with no shortage of viruses circulating but the Hy-Line has proved very robust and can take the knocks."

Commenting on John's recent appointment to the Hy-Line team, Managing Director Omead Serati said: "John has a proven track record of achieving consistently good results from the Hy-Line Brown and his experience will be put to good use, particularly as we continue to see the trend towards cage-free systems."