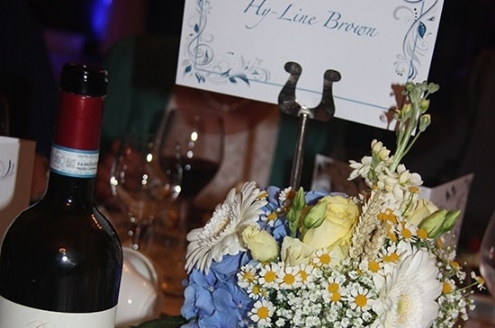 On 1st October, Hy-Line UK, celebrated its 20th anniversary by holding a celebratory dinner at its world-class Millennium Hatchery in Studley.

The dinner was attended by some of Hy-Line UK's loyal customers and friends. During the evening, Jonathan Cade, President of Hy-Line International, presented prestigious awards to Omead Serati, Hy-Line UK's Managing Director, and Nigel Butcher, Production and Technical Director, for playing a major role in driving the business forward.

Hy-Line UK's founding Managing Director, Andrew Hignett, was on hand to tell the exciting story of how the company was formed in 1995 and his dream to build one of the largest, and most technologically advanced hatcheries in Europe, which became a reality when the Millennium Hatchery was built in 2000.

Now, through the continued investment of the EW Group, the Millennium Hatchery is able to remain at the forefront of innovation and technology.