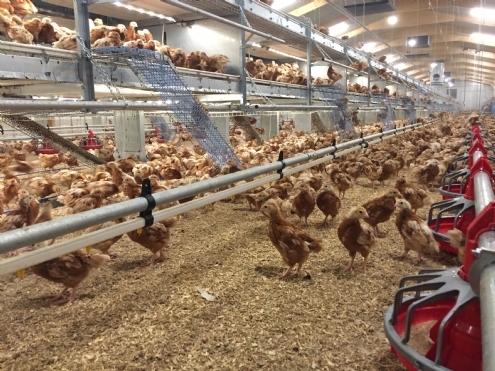 Correct nutrition in the rearing period is essential if hens are to achieve optimal performance throughout lay. So, what do producers need to know? The Ranger investigated this through an interview with Marcus Kenny, nutritionist for Hy-Line.

Feed management during rear has a major impact on pullet development, consequent peak egg production and persistency for the rest of lay. The right nutrient specification level, ration formulation and feed programme during the rearing stage will go a long way towards ensuring good performance in the laying house.

A bird's potential egg mass output is 22.4kg at 80 weeks of age – which is over 11 times its own mature body weight, explains Mr Kenny. It is therefore important for producers to exploit the genetic potential of their hens. "The importance of the rearing period in achieving successful layer performance has been well documented in the past. This relationship is still of importance for the modern layer, especially for extended laying cycles."

Chick quality is also critical, as a breeding company it is important to provide the rearer with the right starting point for a quality pullet.

Data compiled from a number of rearing and laying flocks in 2018 demonstrated that the top quartile performing flocks laid 318 eggs by 70 weeks relative to 2nd quartile flocks that laid 309 eggs.  Interestingly top performing flocks were 6% higher in bodyweight at 18 weeks relative to 2nd quartile flocks. This demonstrates why there is so much value in the rearing period. "Achieving bodyweight objectives in rear, at all ages, is critical in terms of attaining the quality of layer required at the onset of lay and also to maintain persistency," says Mr Kenny. It is also important that any bodyweight loss during transit to the laying house is regained as soon as possible.

Further to that, free range systems need as robust a bird as possible to achieve optimum performance going into the laying period. "So birds not only need a good body weight but also need good body condition, conformation, good frame development and uniformity."

Feeding programmes should be managed based on physiological development and target body weights and not just age. "They should be adaptable to achieve bodyweight objectives at all stages of rear, regardless of any potential challenges experienced by the flock."

Early stage diets with a relatively high nutrient density are sometimes fed to support nutrient intake and body weight development, says  Mr Kenny. "Trial data has shown that increased dietary amino acid levels resulted in a positive response in bodyweight at three weeks of age. Higher nutrient density rearing diets are now used to support early bodyweight development and conditioning through rear and prior to transfer to the laying facility and onset of lay."

However, nutrient intake is also dependant on feed intake. "Efficient feed intake is as important as the nutrient specification of the diet, after all, birds eat nutrients, not percentages of nutrients." Ensuring the right starter diet crumb size is available to the birds is key to this. Feeding the correct crumb size can improve weight gain and uniformity in chicks by increasing their feed consumption and minimising selective feeding. "The majority of particles should be between 1mm to 3mm in diameter, with a minimal level of fine or dusty material," explains Mr Kenny. "The use of diluted, high fibre mash diets are often fed to stimulate digestive tract capacity later in rear. However, this is not recommended until the birds have achieved body weight targets, this is particularly important to consider up to 12 weeks of age when the birds skeletal frame is set."

It is also worth remembering that stressful situations can negatively impact feed uptake. "Feed intake in some flocks can be depressed by as much as 25% during a challenging event such as a vaccination procedure," says Mr Kenny. "Compensating for lower feed intake by increasing the nutrient density of the feed or reverting to a previous stage diet will assist in maintaining nutrient intake and result in bodyweight development less adversely affected by the stress event."

When hens are transferred to the laying house, it is important that their feed caters for the bird coming into lay and to sustain peak production. "Nutrition needs to allow for body weight gain in the early laying period as well."

Added to this, is the target egg size. If a larger egg is required, then this needs to be supported. "Adequate amino acid intake will support this," he explains, "and that needs to be accommodated for in the diet, this will then set the bird up for higher egg size in the future."